Now that fall is here we are getting into the Halloween spirit. 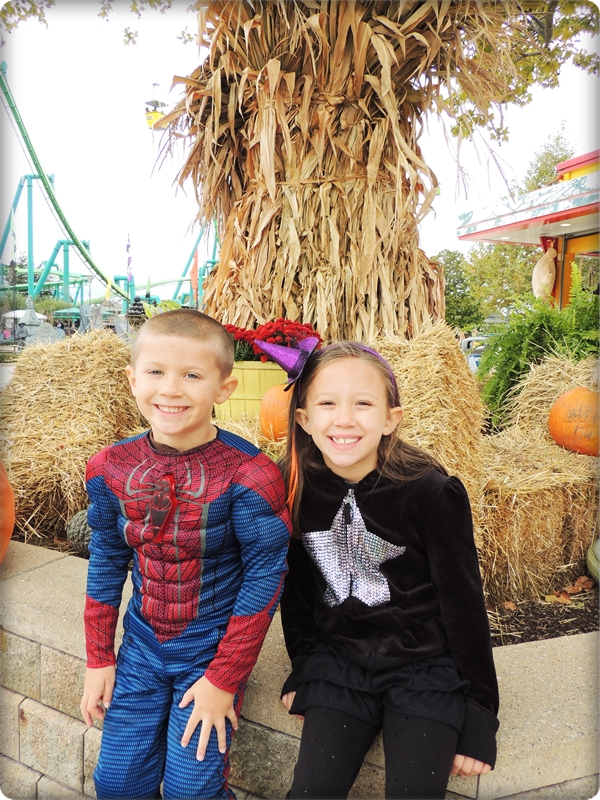 There were a lot of creative displays and one of my favorites was the old ride graveyard. 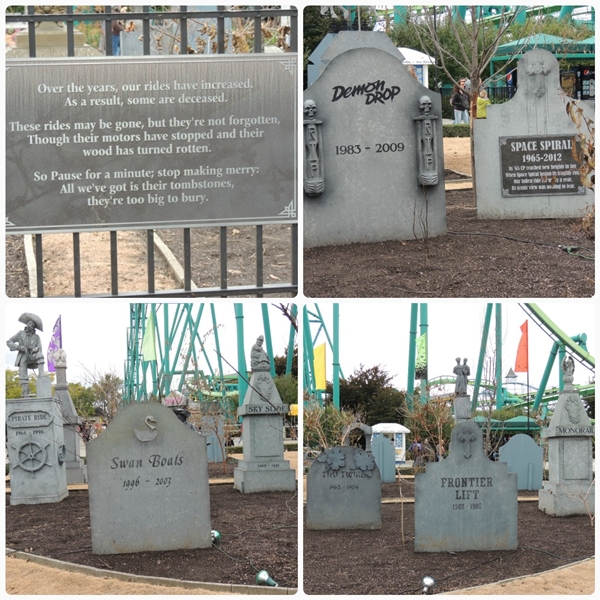 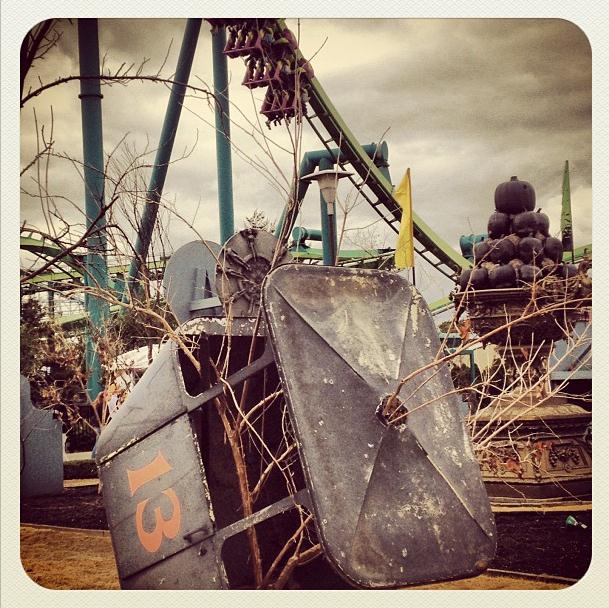 Took this with my phone & used an Instagram filter. I love the added spooky effect.

There was also an animatronic gigantic ogre who nosily snored the day away but then every two minutes or so he would wake up, stand up, and give a frightenly appropriate orgre-like speech that was perfect for the Halloween theme throughout the park. 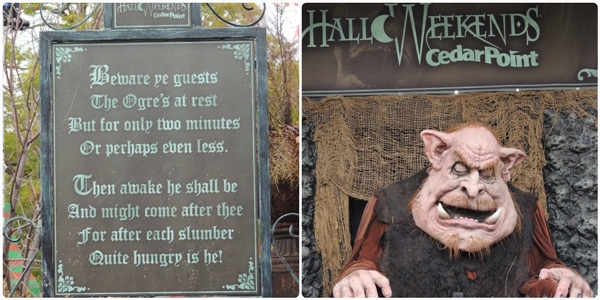 There were lots of decorations around the park that stood out and others were more subtle. 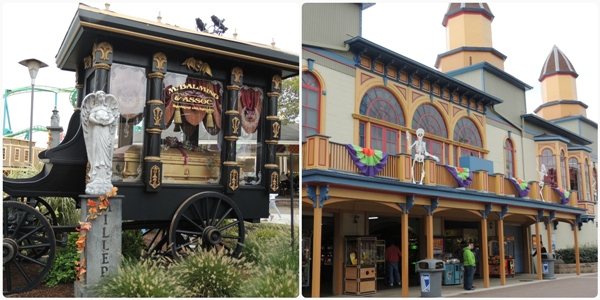 While waiting for the Peanuts Halloween kids costume contest to start at 2 pm Kora & Logan rode a few rides in Kiddie Kingdom. 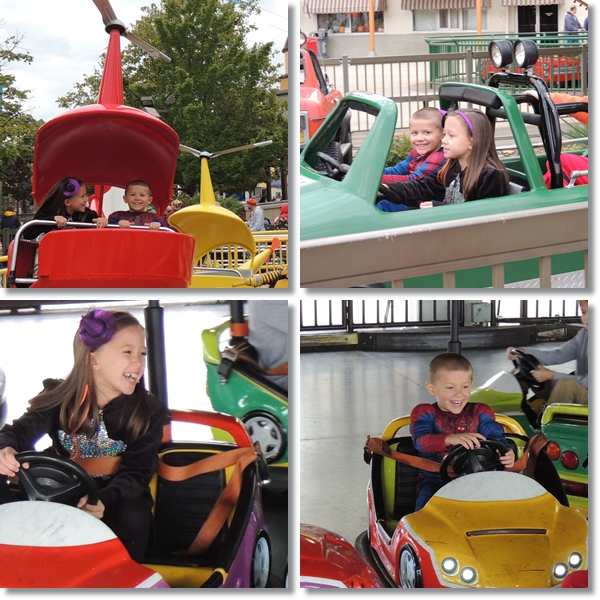 Then we went over to the Magical House on Boo Hill where there was a monster mash going on. 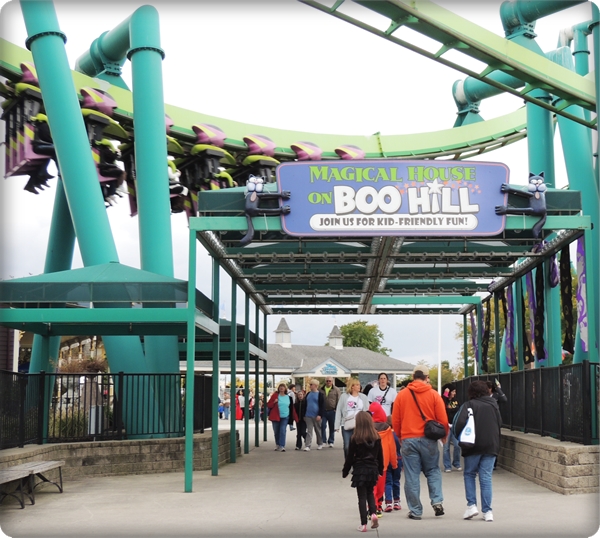 There was also a fun hay maze. 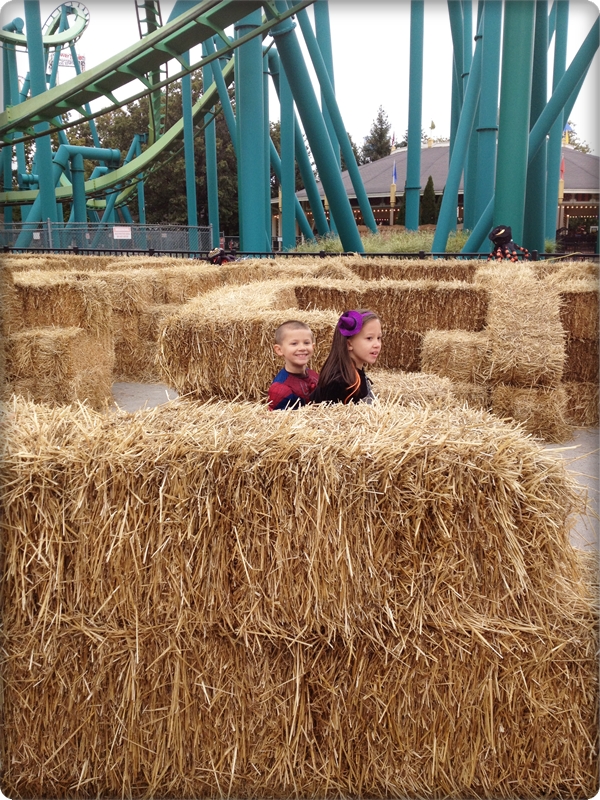 And the Peanuts gang put on a show before the costume contest. 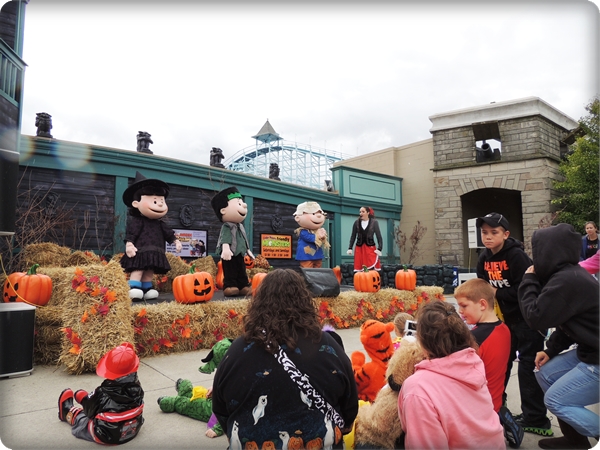 It started to sprinkle and the kids started to get hungry so we headed off to CJ’s Provisions for caramel apples, hot cider, and pumpkin cookies. 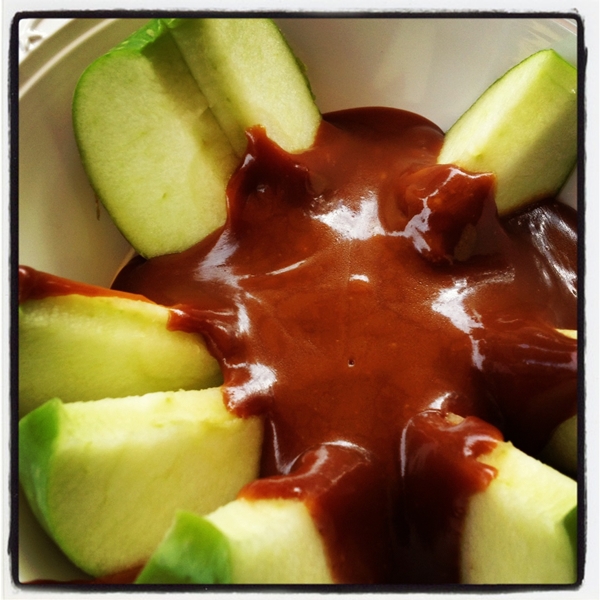 After our snacks, Kora & her cousin really wanted to ride the Iron Dragon. Kora had ridden it last year and unfortunately ended up in tears. She thought it was too fast and too tall and she didn’t like the feeling of flying out of her seat. So I was surprised she wanted to ride it this year but was also glad she did.

They went to get in line and out of nowhere it started hailing!

We ran for cover under the roof of a nearby restaurant. It rained and it poured. 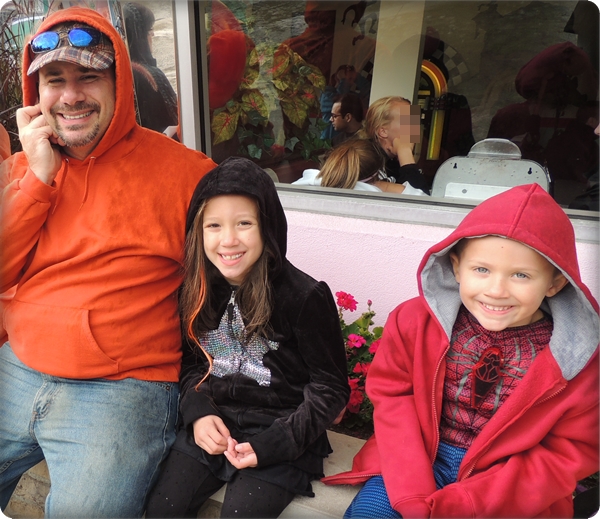 And it rained some more. And all the rides shut down. 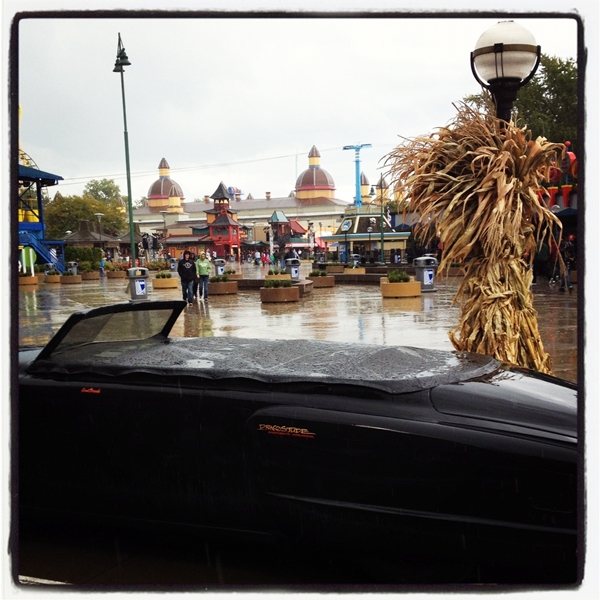 It finally let up enough that we were able to head over to the Dodge ‘Em bumper cars. The kids had a blast bumping into one another and others. It was a great way to get out of the rain and to have some real amusement park fun. 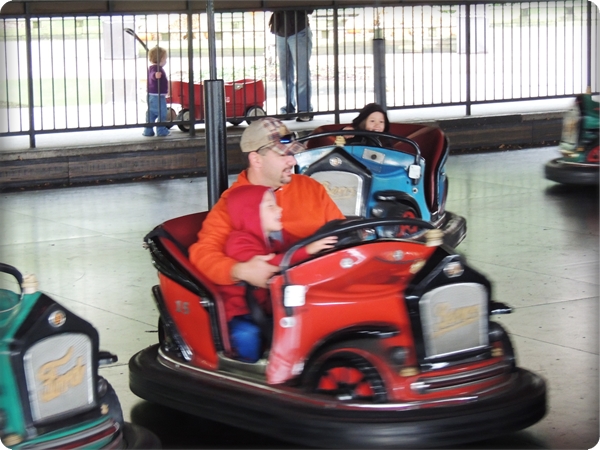 After a couple of rounds on the bumper cars we were about to head back to the Iron Dragon when we saw the Halloweekends parade, the Monster Midway Invasion Celebration, go by. We headed over to watch. It was a really cute parade with the Peanuts gang, fun floats, and a very cool animatronic rock monster. 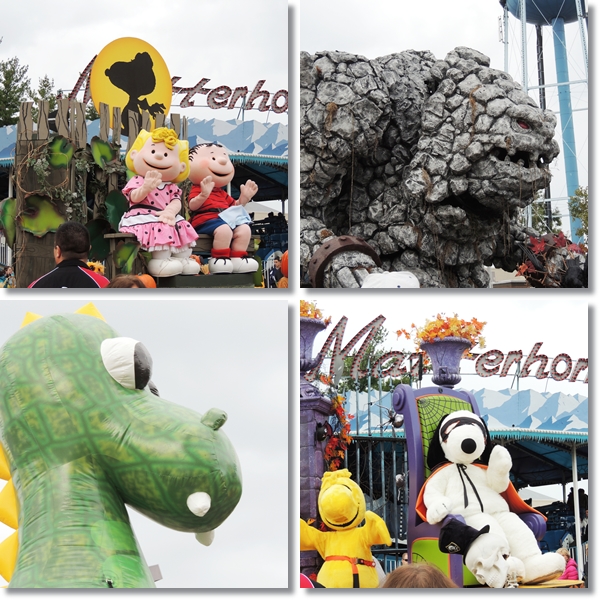 Since the sun was actually trying to shine at this time we went back over to the Iron Dragon. The line was a little longer than usual because the parade had just ended and the other bigger rides weren’t running yet. But it wasn’t a long wait before Kora, her cousin, Dave, and his mom were all buckled in.

The were around the track before we knew it and they were all smiles and waves from the first car! 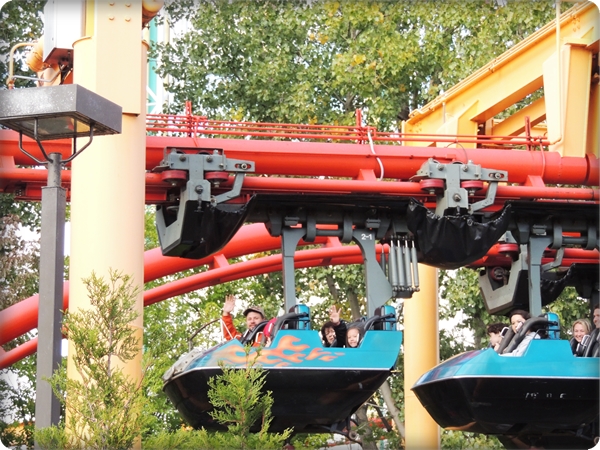 Kora came off the ride skipping and so excited. She loved it and wanted to do it again!

While we would have loved to let them ride again it was getting late and the kids had school the next day. So we rode the Sky Ride out and Kora & her cousin rode Ocean Motion one last time while Logan sat it out. He decided to ride the carousel instead. 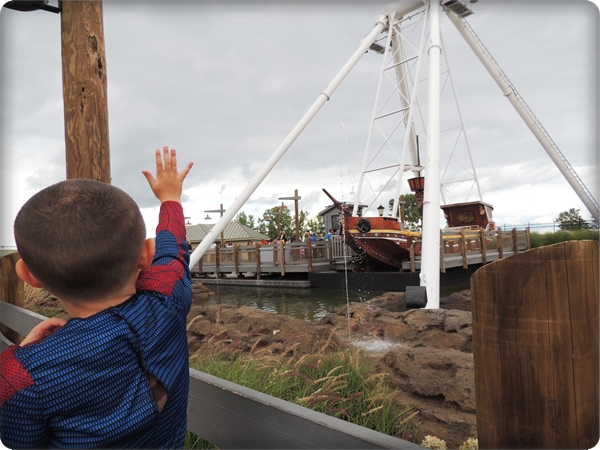 On our way out we picked up some cute plush Pirate Snoopy’s that the kids love. They’ve played with them non-stop since getting home and they couldn’t be a cuter reminder of our fun trip to Cedar Point’s Halloweekends. 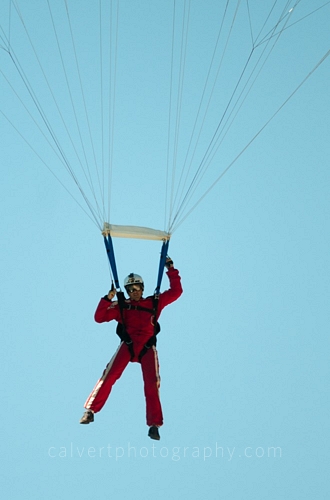 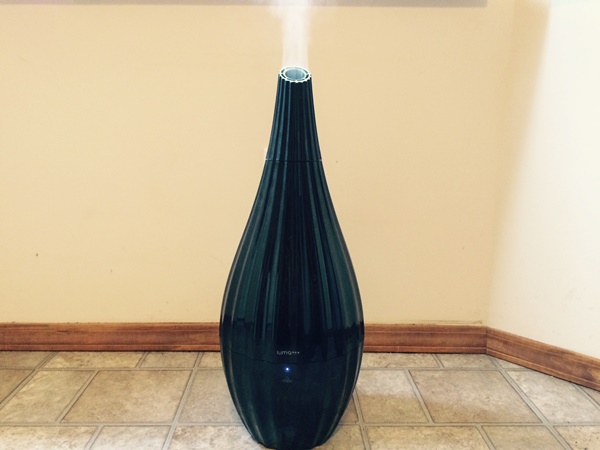 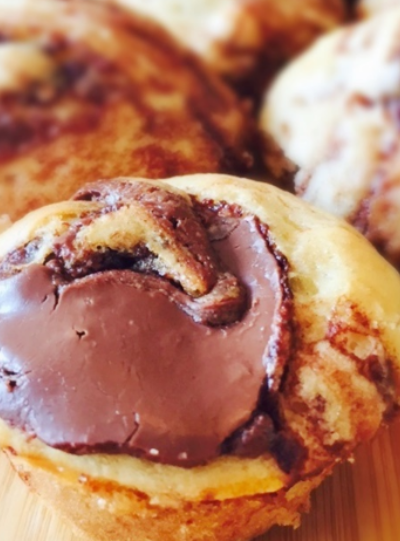 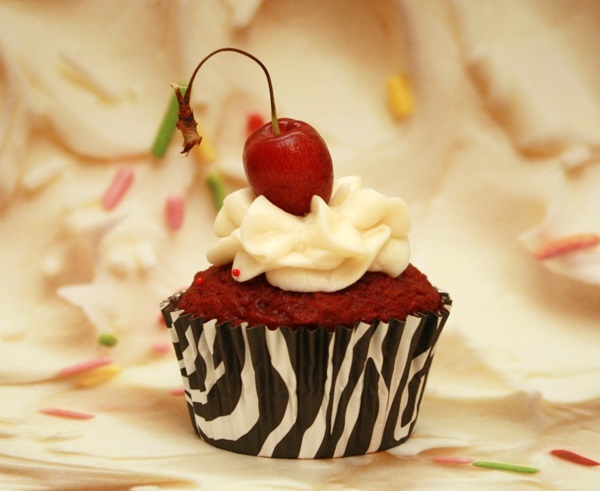 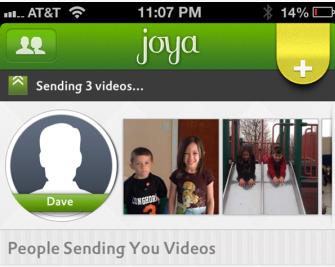